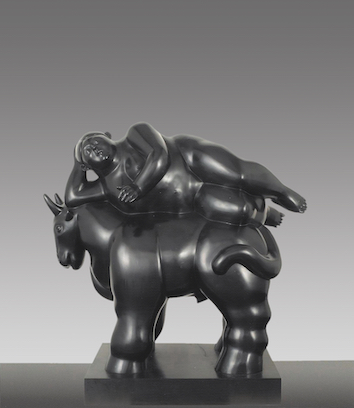 At the age of 88, Fernando Botero still continues to produce art today. Well-known with its voluminous figures, which have been identified with the artist, and which always find their place in his paintings and sculpture, the artist is known for his criticism of the classical concept of beauty. For those who are used to see those figures generally on the canvas in oil paint, Botero’s sculptures can be summarized as the artist’s three-dimensional work where he reflects his critical system. “Sculptures enable me to create real volume. I can touch the forms, I can add them smoothness and I can convey the required sentimentality,” says Botero to explain his connection with this discipline, on which he has concentrated after 1976, and Botero’s sculpture “The Rape of Europa” is inspired by a story in ancient Greek mythology.

According to the story told by Ovidius, a famous poet of the era, Zeus transforms into a white bull in order to attract the Phoenician princess Europa, after whom the continent Europe is named. The Greek god who blends into the king’s herd in this form attracts Europa’s attention, who picks flowers on the seaside and makes her approach him in order to pat him. Benefiting from this opportunity, Zeus attempts to kidnap the princess as she mounts on his back and swims to the Crete Island. The Greek god reveals his real identity to Europa on this island, and after lavishing gifts on the princess, he declares her as the first queen of Crete.

This story, which was also illustrated previously by many artists such as Tiziano Vecellio and Rembrandt, facilitates to interpret the artist’s inspiration, who depicted the traditional Fiesta Brava celebrations and scenes of bull fighting in his early paintings in 1944. The sculpture is one of the most concrete examples of how Botero adapts historical references to contemporary sculpture approach. You can visit Entropia’s gallery to take a closer look at, and have detailed information on, this piece of art crafted completely from bronze in 2008.